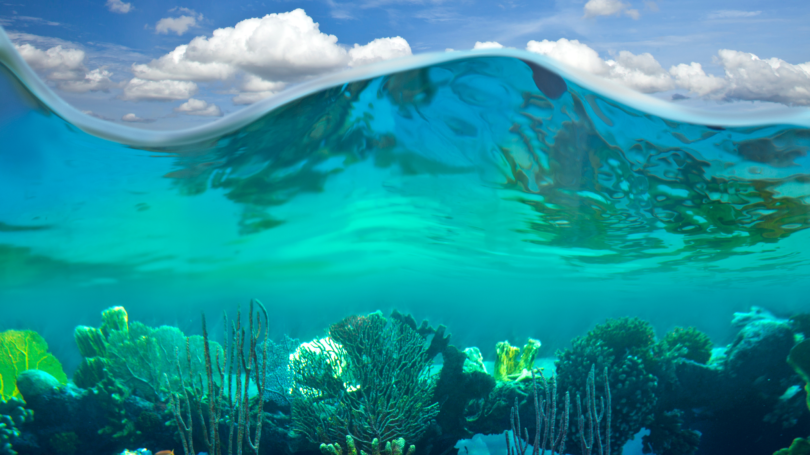 It’s a commonplace experience that, if you dive underwater, your vision immediately becomes blurry. Most, but not all, fish have the same experience when they jump out of the water. There are rare exceptions, however! Some fish are able to see well both in and out of the water, and there is one unique group of human beings able to see clearly underwater without wearing goggles. Why this is the case gives interesting insights into how vision works. It also shows us how animals have evolved to allow them to function visually in their chosen environment.

How does focusing work?

To understand how vision changes when you go from a dry to a watery environment, you need a basic understanding of how focusing occurs. To make a clear image, whether you are a human, a flounder or a digital camera; light rays entering your eye must be focused on the thing that detects the image whether it is your retina, a camera’s film or digital sensor.

The eyes of all vertebrates (bony animals) are similar in terms of “design” and how they function. The eye has a spherical or spheroidal shape, with a clear front surface called the cornea. Land animals have evenly curved corneas which do about 60% of the focusing required to see clearly. In the case of fish, the cornea is often very flat and can even be irregularly shaped. The reason why this is not a problem for a fish will be explained later.

Inside the eye, there is a lens that is able to change shape in land animals; and by doing so change the focus of the eye. Fishes’ eyes usually change focus by moving the lens backwards and forwards rather than changing the shape. Land animals lens provides about 40% of the focusing power of the eye. In the case of fish, the lens usually provides all, or almost all, of the focusing power. This will also be explained later.

The focusing power of an optical device such as a cornea or a lens depends on two factors; the curvature of the surface of the focusing device (its radius of curvature), and the refractive index.

These are some typical refractive indices:

When light travels between two substances with different refractive indices it gets bent or refracted. The bigger the difference, the more light gets bent. If there is very little difference between the two indexes then light may travel almost straight through the second substance without being bent.

The curvature of a focusing surface and the refractive index are combined in a formula that tells you how powerful a lens is.

For someone standing on the edge of the sea surrounded by air, the formula becomes:

This is their normal focussing power allowing clear focussed vision. As soon as they dive into the water the formula becomes:

Because the top number is so small – almost zero – the focusing power of the cornea also becomes almost zero. It has almost no ability to focus light and the eye instantly loses almost 60% of its focussing power, and vision becomes very blurred.

For a fish, adapted to permanent life underwater the formula is always

How does this affect the focusing?

This means that their corneas do almost nothing – they have no real effect on the focusing of the eye. It doesn’t matter much whether the cornea is curved or flat or even distorted, it has very little effect on how well the fish is able to see.

For a fish, almost all the focusing of the eye is done by the lens of the eye. Lenses of fish eyes are usually spherical, that is, they are maximally curved in order to provide enough focussing power to create a clear, focussed image on the retina.

A fish out of water has the opposite problem to a land animal underwater. Out of water, a fish’s cornea now has focusing power because of the difference in refractive index between air and the cornea, and the fish instantly becomes very short-sighted. Of course, a fish out of water has bigger problems to deal with than blurred vision.

For fish that spend all their time underwater, and for animals that spend all their time out of water, things are straightforward; their eyes are adapted to see clearly in their chosen environment. However, there are some fish that spend a lot of time partially or completely out of the water! These fish have evolved some amazing adaptations to see clearly both in and out of the water. There are also mammals and birds which spend a lot of time in the water, and in some cases, their eyes have also evolved to allow better vision underwater.

Animals that can see on land and underwater

This freshwater fish lives in Central and South America. It swims on the surface of the water in such a way that the waterline cuts across the middle of the raised and bulgy eyes.

This fish appears to be able to see objects above and underwater simultaneously, the different focussing power required for each being provided by the irregular shape of the lens.

Flying fish have evolved the ability to fly as a way to escape predators. They launch themselves into the air by sculling rapidly with the lower lobe of their tail fin and then glide using their enlarged pectoral fins which act as wings. Most flights are from 30 to 50 metres, but flights of up to 200 metres have been recorded.

Once airborne, a flying fish has very different visual needs from those underwater. They need to be able to see down to judge their height above the water, to see behind to look for predators underwater, and they need to be able to see ahead to look for a safe landing spot. Flying fish have a pyramid-shaped cornea with 3 sides or windows. Although the function of the three-windowed cornea is uncertain, it is thought that this allows fish to see in several different directions as described above. Flying fish have been measured as having clear distance vision in the air and being slightly long-sighted in the water.

Seals spend large amounts of their time underwater feeding. Therefore their eyes are primarily adapted to provide good vision underwater; where they are often looking for food in murky water with poor lighting. They have large eyes with pupils which dilate widely to collect as much light as possible in poor lighting. Like fish eyes, the lens of a seal’s eye is almost spherical. This provides the necessary focusing power to compensate for the loss of focusing power from the cornea while underwater.

Seals have quite poor eyesight above water because the cornea is not flat and gains a lot of focusing power in the air. This, combined with the spherical lens, makes seals quite short-sighted when on land, just like a fish out of water.  Seal’s pupils contract to a very narrow slit when on land and this partially improves the otherwise poor vision, acting a bit like a pinhole camera.

Gannets are large seabirds that catch food by plunge-diving. They search for prey while flying and then dive steeply down into the water to catch the fish. They can dive from heights of up to 30 metres and reach speeds of 100 km/hr when they hit the water. This lifestyle requires that they can see well while flying – to be able to see quite small fish from a significant height while looking through waves and disturbed water – and also while underwater where they actively swim after target fish.

Research carried out on Australasian gannets at Cape Kidnappers, near Napier, has shown that gannets have clear vision both in the air and underwater. The research showed that they are able to refocus within less than a tenth of a second of entering the water – almost instantaneously! This allows them to start chasing prey immediately after they hit the water – at 100 km/hr. Although the mechanism that produces this rapid and extreme change of focusing is uncertain, it is thought that the lens of the eye is pulled against the edge of the pupil, the opening in the iris, causing the lens to become more spherical, increasing its focusing power to compensate for the loss of corneal focusing when the bird hits the water.

There is an urban legend (maybe a maritime legend) that a lot of gannets become blind because they develop retinal detachments because of the repeated shock caused by hitting the water at high speed. There is no evidence to back this story up. However, many dead gannets are found with head and neck injuries, thought to be caused by other gannets hitting them when they dive.

Finally, there is one unique group of humans who are able to see clearly both on land and also underwater.

Along the west coast of Thailand live the Moken people, also called sea-nomads. Their children spend a lot of time in the water, foraging for food. They can do this because they have developed the ability to see clearly underwater.

Researchers have found that the children use strategies used by other animals that need to see clearly both in and out of the water. When underwater, they are able to constrict their pupils to a pinpoint, a bit like a seal out of water. They also can voluntarily maximally accommodate – they increase the curvature of the lens of the eye to increase its focusing power to compensate for the loss of corneal focusing power in the water. Both these abilities are not normally under voluntary control. Interestingly, the researchers found that this skill was teachable. They were able to train European children on holiday in Thailand to do the same thing. Unfortunately, adults are not able to do this. As we age, we lose the ability to change the curvature of the lens of our eye – a process called presbyopia.

If you enjoyed this blog then check out some of our other interesting blogs here: