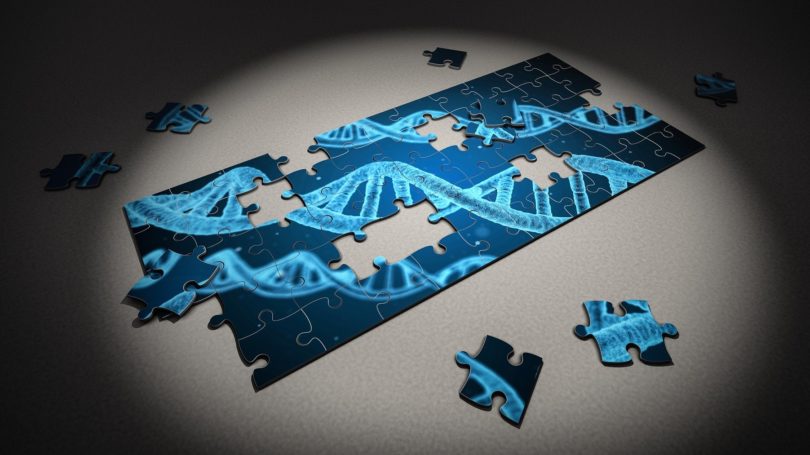 We see inherited traits every day. Families with the same hair colour, eye colour, nose shape or build. But those of us who don’t experience poor vision probably haven’t considered the links between genetics and eyesight. Many eye conditions do have an underlying genetic cause, which means they can be inherited or “run in the family”. For people who have such a condition in their family, it can be an understandable concern that they or their children may also develop the condition. This article will discuss how inheritance occurs and several common eye conditions which can be inherited.

An introduction to genetics

Genes carry the information that is passed to you from your parents and determines the inherited characteristics. DNA, or deoxyribonucleic acid, makes up genes. DNA is found in all living organisms – animals, plants, fungi, bacteria and even viruses.

The information in DNA is stored as a code, which is made up of four compounds or bases:

The order or sequence of these bases determines the information available for building and maintaining an organism. The DNA in each cell is then stored in a structure called a chromosome. Each chromosome carries many different genes. You could think of DNA as a really complicated recipe and the chromosomes as the recipe book.

Variations in the DNA sequence of a gene affect the characteristic that the gene codes for. For instance, the gene that codes for eye colour will be different between individuals with brown and blue coloured eyes. A certain amount of variation in the DNA sequence is normal and will not necessarily produce a disease or physical abnormality. However, if the change in the DNA is significant, this may result in a malfunction in the gene such that a disease or health problem is produced. Variation in genes are known as mutations. Mutations occur spontaneously and are the underlying mechanism by which the evolution of species occurs. Mutations can also occur due to environmental factors such as exposure to radiation, ultraviolet light, certain chemicals and viruses. As you age mutations in DNA also become more common.

There are five different patterns or types of inheritance. These patterns affect the way in which a genetic variation is passed from parent to child. Also the chance that the child will develop a genetic condition or will be a healthy “carrier” for the gene variation.

These conditions are caused when there is a mutation in a gene on an autosomal chromosome. Each person with such a condition will have at least one affected parent. The condition will occur in every generation, and on average 50 percent of children will be affected.

X linked genetic conditions are caused when there is a mutation in a gene on the X chromosome. Females are affected more frequently as they have two X chromosomes. But affected males and females can occur in the same generation.

Males are more frequently affected and affected males are often present in each generation. This is because males only have one X chromosome and therefore only need one copy of the mutated gene. Whereas females need to inherit an X chromosome from both parents with the mutation.

You only inherit Mitochondrial DNA from your mother. Therefore only your mother can pass on mitochondrial conditions . An affected male can not pass the condition onto his children. However these conditions can affect both males and females and can appear in every generation.

Genetics and the eye

Genetic factors play a major role in normal eye development and also in many kinds of eye disease. This includes some of the leading causes of vision loss among infants, children and adults. Now, let’s take a look at the genetics of some normal variations in the eye and vision, and some of the more common eye conditions which can cause visual impairment.

It used to be thought that eye colour was controlled by one gene which had 2 forms. These were a dominant brown form and a recessive blue form. Therefore two blue eyed parents could not have a brown eyed child, and if they did, someone else was the father! This is completely untrue. It is now known that multiple genes affect eye colour. With one gene, known as OCA-2, being the most important.

Colour blindness, also known as colour vision deficiency, is characterised by an inability to distinguish between different colours. The human eye sees colours using specialised cells in the retina called cones. There are three types of cones which can detect either red, green or blue. The primary cause of colour blindness is an abnormality of light sensitive pigment in the cones.

Because colour vision deficiency is due to a genetic variation, it is present from birth and is not treatable. There are some devices available commercially that can reduce the impact of colour deficiencies, by enhancing the differences between some colours, but they don’t work for everyone and they don’t cure the colour deficiency.

The genetics of myopia involve hundreds of genes. For this reason the condition does not have a clear pattern of inheritance. The risk of developing myopia is greater for the immediate relatives of myopic people, such as children and siblings. This increased risk is probably due to genetic factors but may also be related to environmental and lifestyle factors that are shared by members of the same family. Myopia is more common in people of East Asian descent and in some Jewish communities.

High myopia, that is where an individual is extremely short-sighted, also rarely has a clear pattern of inheritance. However it can be caused by a mutation in a single gene and can then follow an autosomal dominant, autosomal recessive or X linked inheritance pattern.

Glaucoma refers to a condition where the normal fluid pressure inside the eye increases and damages the optic nerve, causing loss of peripheral vision. Like cataracts, glaucoma is more common in older people, but it can also occur in infants and young people.

Primary open angle glaucoma in adults, is the most common cause of irreversible blindness in the world. The risk factors for this condition include ageing, elevated eye pressure, African ancestry and a family history of glaucoma. We still not fully understand the genetics of glaucoma inheritance. Multiple genes have been found to contribute to the development of glaucoma, with no single gene being entirely responsible. However, the take-home message is that if you have family members with glaucoma, you are more likely to develop it yourself and should have regular check ups with an Ophthalmologist or Optometrist.

The term cataract refers to an opacity of the lens inside the eye. This opacity obstructs light entering the eye which reduces vision. Cataracts most frequently affect older people, but they can be present at birth (congenital cataract),  develop during childhood and teenage years (juvenile cataract) or occur in younger adults. Cataracts can also develop following an eye injury, eye surgery, inflammation in the eye or after taking some medications.

Cataracts in older people are associated with many environmental factors such as cigarette smoking, obesity, high blood sugar and diabetes, ultraviolet light exposure and exposure to steroid medications. Epidemiological studies have also suggested that genetic factors are important risk factors for the development of age-related cataracts.

Stargardt disease and Retinitis Pigmentosa (RP) are inherited retinal conditions which can have a severe impact on vision. Both diseases causes progressive vision loss.

In Stargardt it affects a small area near the centre of the retina called the macula. The macula is responsible for sharp central vision. This is needed for detailed tasks such as reading, driving and facial recognition. The macula is also responsible for colour vision. The signs and symptoms of Stargardt disease typically appear in late childhood to early adulthood and get progressively worse with time.

Stargardt disease can have different inheritance patterns. It can be an autosomal recessive condition, where the parents of an affected individual each carry one copy of the mutated gene but do not themselves typically show signs or symptoms of the condition. It can also be an autosomal dominant condition in which case at least one parent would also have the condition.

Retinitis pigmentosa is not a single condition but is rather a group of related conditions that cause progressive loss of vision due to degeneration of the retina, similar to Stargardt disease. The first sign of RP is usually the loss of night vision during childhood. If the condition progresses, blind spots develop in the peripheral vision which steadily enlarge and merge to cause tunnel vision. Eventually the central vision is also affected. There are different gene mutations that cause several types of RP, they all have the effect of retinal degeneration. Patterns of inheritance include autosomal dominant, autosomal recessive and X linked.

Are there tests available?