Blepharitis is the inflammation of the eyelid margin, which can cause crusting around the eye, swollen and red eyelids and dry eye symptoms. It tends to return, so you will usually need to continue to follow an eyelid hygiene regime.

Blepharitis is the inflammation of the eyelid margin. It can cause crusting around your eye, swollen red eyelids, as well as dry eye symptoms. Blepharitis usually affects both eyes but this can be unequal and on occasion can just be one eye. Blepharitis can occur at any age and is usually a chronic condition, so it is likely to recur throughout life rather than happening once and going away.

The two most common causes of blepharitis are staphylococcus and seborrheic dermatitis. It is possible to have a combination of both. Meibomian Gland Dysfunction (MGD) is also considered a form of blepharitis. Rosacea, psoriasis, allergies and organisms around the eyelids may cause an increased risk of acquiring blepharitis.

Staphylococcus is a type of bacteria. It is commonly found living in low numbers on the skin and doesn’t do any harm. For some people, however, these bacteria can cause blepharitis, an infection of the eyelid. It is poorly understood why it affects some people and not others. Seborrheic blepharitis is related to a form of dermatitis with the same name. The affected skin tends to be oilier and can become scaly. Seborrheic dermatitis is known to cause dandruff as well as a rash on the face or upper body.

It is thought that this condition may potentially occur when someone is reacting to a certain yeast or mite on the skin. These micro-organisms are commensal and do not usually cause any harm. It is unclear how they could potentially cause an inflammatory reaction in people who develop this form of blepharitis.

On occasion blepharitis symptoms can occur due to an allergy. This is usually due to a material that comes near your eyes (ie glasses) or from a product that goes in your eyes (ie glaucoma medication). 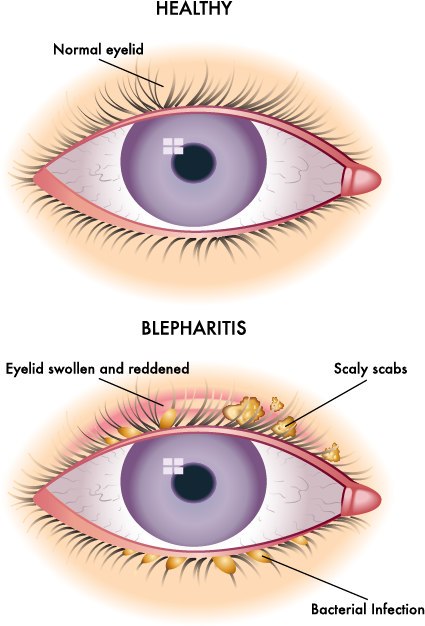 Blepharitis is not usually painful, in most cases, the eyelid tends to be irritated with a gritty feeling rather than painful. The eyelid may appear red with crusting on or between the eyelashes, scaly skin and potentially some swelling. The eye can also become watery or dry as a part of this condition.

Blepharitis does have the potential to become painful if it has been there for some time and a complication like an eye infection occurs.

Most blepharitis falls into the chronic category, which means that it usually a condition that recurs rather than occurring once and going away.

Usually, the eyelashes are affected as well as the front area of the eyelid.

Affecting further back on the lid margin closer to the eye ball and usually involving the MG glands. This condition is also known as MGD. Most instances of this condition are a combination of the two.

Treatment of blepharitis varies slightly depending on the cause and usually follows up a step-wise approach. An example treatment path may be:

If there is a side effect of blepharitis like a corneal ulcer or a stye (internal hordeola) then more treatment options to treat these conditions maybe needed.

Unfortunately, blepharitis tends to return even with good management of underlying of conditions. This usually means that an eyelid hygiene regime needs to be followed.

Our eye experts have compiled extensive information on other eye conditions. Read more about: