We at the Wellington Eye Centre are enormously proud to be the first laser clinic in New Zealand to install the VisuMax® femtosecond laser.

Combined with the MEL90 excimer laser this constitutes the most advanced and sophisticated laser vision correction system available anywhere in the world. Unlike competing laser systems, Carl Zeiss Meditec designed both lasers from the ground up to work together seamlessly to provide highly sophisticated, predictable and safe laser vision correction.

We know that with the combination of the MEL90 and VisuMax® lasers and the sophisticated diagnostic capability of the CRS Master we have the best overall "laser package" currently available anywhere. 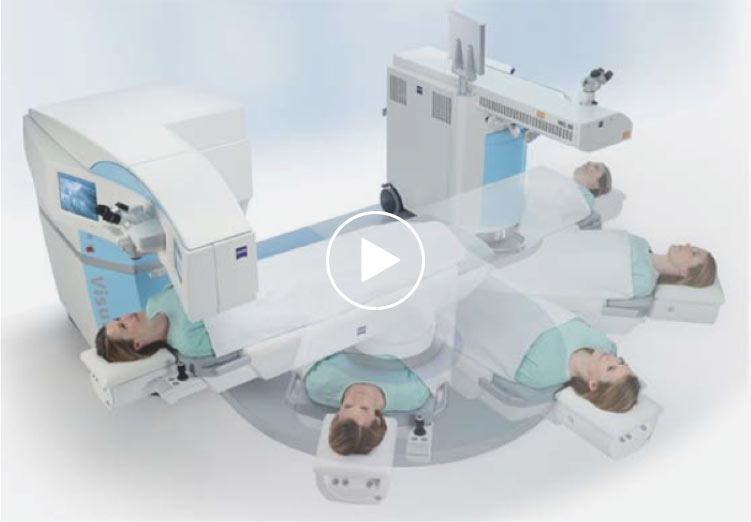 How the VisuMax® femtosecond Laser Works

A femtosecond laser produces extremely short pulses of laser light which are used to divide layers of corneal tissue. A femtosecond is 1/1000000000000000 (1x10-15 ) of a second. One femtosecond compared to one second is like the diameter of a human hair relative to the distance between the earth and moon. The VisuMax® laser produces 500 pulses a second, each pulse lasting up to 580 femtoseconds. During the time of one of these pulses, light travels less than a millimeter.

These laser pulses are focused at a very small point in the corneal tissue where the energy released splits the tissue. A pattern of laser spots is laid down in such a way as to separate a layer of corneal tissue.

The accuracy of all femtosecond lasers is adequate to cut a flap of corneal tissue which is then lifted out of the way, allowing the tissue under the flap to be reshaped, thus correcting the refractive error. This procedure is known as femtoLASIK or iLASIK. However most lasers, are not accurate enough to allow correction of refractive errors.

Only the VisuMax® laser, used by the Eye Centre Group, has sufficient accuracy that it can be used to reshape the cornea for correction of refractive errors as well as cut a corneal flap. The VisuMax® laser can therefore be used to perform femtoLASIK like other femtosecond lasers, but it is also able to perform complete laser vision correction procedures. No other current femtosecond laser has the accuracy, speed and capability of the VisuMax laser.

All data in table is based on published studies

****With a lower eye pressure, the eye remains more comfortable and is able to see during the procedure. A high eye pressure may be associated with damage to the retina

****The VisuMax® is the only femtosecond laser which is able to correct refractive errors as well as being able to cut a corneal flap. This has opened the way for truly "flapless" laser vision correction

Find out more about the Visumax femtosecond laser here

Find out more about the MEL90 excimer laser here

A leading London refractive surgeon talks about the VisuMax, watch the video below: